Be the first to ask a question about this.

Details: Automatic wireless backup. AirPort Time Capsule includes a 2TB or 3TB hard drive that works with Time Machine in OS X to create the perfect no-hassle backup solution.* There are no cables, and you can back up all the Mac computers in your home to a central location — automatically, wirelessly, and in the background. Ultrafast 802.11ac Wi-Fi.With 802.11ac technology and a beamforming antenna array, AirPort Time Capsule gives you up to 3x faster Wi-Fi and a stronger, clearer signal.** And because it transmits at both the 2.4GHz and 5GHz frequencies at the same time, your wireless devices will automatically connect to the best available band for the fastest performance possible. Designed with performance in mind.With the antennas at the top of the elevated design, AirPort Time Capsule now has a higher platform for dispersing the signal. We also increased the number of antennas. There are now six of them — three for the 2.4GHz band and three for the 5GHz band. Together with 802.11ac technology, they let you connect faster, farther, and with more power than ever before.Easy setup for iOS and OS X. Connect your DSL or cable modem to AirPort Time Capsule and use the built-in setup assistant to create your new wireless network in just a few taps from your iPhone, iPad, or iPod touch. If you’re using a Mac, use the built-in AirPort Utility. Setup is just as fast and just as easy. Share your hard drive or printer. AirPort Time Capsule can turn any external USB hard drive into a secure drive you can share across your Wi-Fi network. So all the documents, videos, photos, and other files instantly become available to anyone, Mac and PC users alike. You can even connect a printer and share it wirelessly. Compatibility and security.Any Wi-Fi device you have will work with AirPort Time Capsule. That’s because it’s compatible with devices using the 802.11a, 802.11b, 802.11g, 802.11n, and 802.11ac specifications. And since AirPort Time Capsule features a built-in firewall that protects your network from malicious Internet attacks, you can enjoy the web with peace of mind.*1TB = 1 trillion bytes; actual formatted capacity less.**AirPort Time Capsule is based on an IEEE 802.11ac draft specification. Performance based on comparison with Apple’s 802.11n products. Comparison assumes AirPort Time Capsule network with 802.11ac-enabled computer. Speed and range will be less if an 802.11a/b/g product joins the network. Accessing the wireless network requires a Wi-Fi-enabled device. Actual speed will vary based on range, connection rate, site conditions, size of network, and other factors.

With the AirPort Time Capsule, backing up your Mac couldn't be simpler. It works with Time Machine in OS X to automatically and wirelessly back up your data to its 2 TB hard drive, so you never have to worry about losing anything important. And the AirPort Time Capsule doubles as a Wi-Fi base station with next-generation 802.11ac technology, for speeds up to 3x faster than the previous 802.11n standard. It's easy to set up and highly secure, letting you share your broadband Internet connection, a USB printer, or a hard drive. And the new vertical design has a smaller footprint, so it saves desk space, as well as your files. 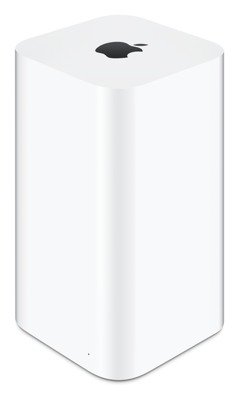 The Airport Time Capsule is also available in a 3 TB model.

With AirPort Time Capsule, you get a superfast Wi‑Fi base station and an easy-to-use backup device all in one. Backing up your data couldn't be easier -- just set it up once and AirPort Time Capsule does the rest. Every photo, file, song, app, and OS X setting is saved, so you never have to worry about losing anything important again.

AirPort Time Capsule is designed to partner seamlessly with Time Machine in OS X Leopard or later to protect your data. They work together smartly so that after the initial backup, only the files you’ve changed are backed up -- automatically, wirelessly, and in the background. If you have multiple Mac computers in your home or office, you can back up and store files for each Mac -- no more need to attach an external drive to each Mac every time you want to back up.

With three-stream 802.11ac technology, the AirPort Extreme Base Station can reach data rates of up to 1.3 Gbps (based on theoretical peak speeds) -- up to three times faster than 802.11n Wi‑Fi. You also get double the channel bandwidth, with 80 MHz-wide channels providing more room for more data to flow faster than ever. And if you have 802.11a/b/g/n devices, AirPort Extreme maximizes that connection as well.

It features simultaneous dual-band 802.11ac Wi‑Fi, which transmits at both the 2.4GHz and 5GHz frequencies at the same time. That means your devices automatically connect to the best available band for the fastest possible performance.

Beamforming Puts the Focus on Your Device

The new AirPort Extreme Base Station features the intelligent, powerful beamforming antenna array. Most base station antennas emit an equal and constant Wi‑Fi signal in all directions. But the beamforming antenna array is smarter -- it knows where an 802.11ac device is on the network. Then AirPort Extreme targets its signal to that device, so your Wi‑Fi signal is stronger, clearer, and faster.

Connect to Wi‑Fi from Any Device

The AirPort Extreme can turn an external USB hard drive into a drive you can share with all the users on your network and access securely over the Internet. This feature--AirPort Disk--is a simple and convenient way to share files among everyone in your family, office, or class.

Just connect the external hard drive to the USB port on the back of your AirPort Extreme and all the documents, videos, photos, and other files on the drive instantly become available to anyone on the secure network -- whether they use a Mac or a PC.

With its wireless printing capabilities, you can plug a printer into the AirPort Extreme, add it to the printer list on your Mac or PC, and start printing -- all without a cable tethered to a computer. AirPort Extreme uses the Mac- and PC-compatible Bonjour networking technology to let everyone on the network take advantage of one centrally available printer.

If you want to share a hard drive as well as share a printer across a network, you can connect a USB hub to the AirPort Extreme and attach your devices to the hub. Share both a printer and a hard drive, multiple printers, multiple hard drives, or a combination.

What's in the Box 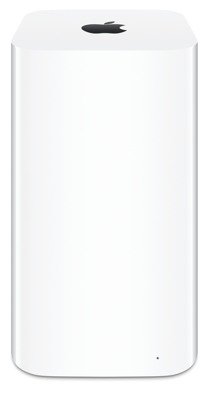 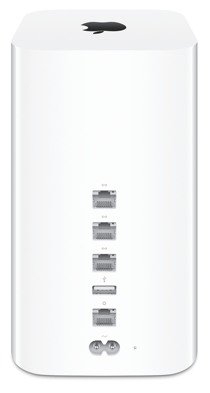 Note : Color May be slightly different due to photography lighting

Back to Large Checked Luggage